If one of the discs in the cervical spine (neck) is damaged due to conditions like herniation or degenerative disc disease, cervical disc replacement may be an option. During a cervical disc replacement, the damaged disc is replaced with an artificial disc. This relatively new technology allows for the same type of function as a normal disc and may be an alternative to spinal fusion.

What is an Artificial Disc? 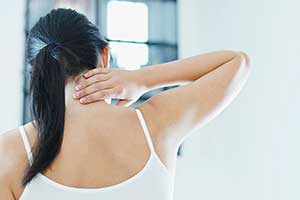 Artificial cervical discs are designed to mimic the function of a normal cervical disc. Several artificial disc implants have been approved for use in the United States by the FDA in recent years, but they have been used in other countries for longer periods of time.

Artificial discs are made up of two metal surfaces, which are attached to the ends of the vertebrae above and below the disc space. The disc itself is replaced with a medical-grade plastic insert.

How is the Procedure Performed?

A cervical disc replacement, or arthroplasty, is usually performed using an anterior approach, much in the same way as an anterior cervical discectomy and fusion (ACDF). An incision is made at the front of the neck, and the damaged disc is removed, along with any bone spurs or loose fragments of tissue. Because damaged discs can sometimes lose height as they degenerate, the vertebrae may need to be moved back to their original positioning. This can help to relieve pressure on the surrounding nerves.

Once the space has been prepared, the metal components are put into place at the ends of the vertebrae above and below the disc space, and the plastic spacer is placed in between the two metal components.

What are the Benefits of Cervical Disc Replacement?

Cervical disc replacement may reduce the likelihood of problems in adjacent discs, because the artificial allows for more normal neck motion than a fusion. Artificial disc implants may eventually wear over time like hip and knee implants, but because they have been used in the United States for a relatively short amount of time, we have been unable to define on average how long disc implants will last. However, the spine generally takes on less stress than the hips and knees, so wear on the implants has generally been minimal in laboratory studies.

Who is a Candidate for Cervical Disc Replacement?

Patients who have disc damage in the cervical spine caused by degenerative disc disease or other conditions may be eligible for cervical disc replacement. In most cases, surgery is only recommended if nonsurgical treatment options do not relieve symptoms.

At Austin Spine, we offer a variety of surgical and nonsurgical treatment options for degenerative disc disease, including cervical disc replacement. If you would like to learn more about artificial disc replacement at Austin Spine or would like to schedule an evaluation to find out if you are a candidate, please contact our office at (512) 347-7463.