This condition affects approximately 10% of the athletic population and 5% of the population in general. It can cause back, buttock, and thigh pain, and even radicular pain into the leg (below the knee) from compression of the spinal nerves. Most of the time, this condition is asymptomatic and is an incidental finding on X-rays.

Spondylolisthesis is defined as one vertebral body translating on another, typically forward slipping. It can be caused by a crack in the connection between the facet joints, the pars interarticularis, or in degenerative conditions where the facet joints become incompetent.

Isthmic Spondylolysis implies a stress fracture of the pars interarticularis and it may progress to slipping of the vertebrae if the fracture widens (isthmic spondylolisthesis). The most common vertebral level is L5–S1, but it can occur at any level. Rarely appearing before age 8, spondylolisthesis can progress and in rare cases completely dislocate (spondyloptosis). Discovered in a growing child we watch this carefully for progression and consider surgical treatment at a 50% slip. The typical scenario is much more benign and rarely needs surgical treatment. There seems to be a genetic predisposition to the pars fracture as it is seen in up to 40% of Alaskan Indians. It is also commonly associated with a steep slope of the sacrum or high pelvis incidence. If the top of the sacrum is steeply sloped there is much more sheer stress on the pars interarticularis at L5. The sacral slope or pelvic incidence is determined genetically and doesn't change with growth. The amount of slippage rarely progresses significantly in adulthood.

Treatment is totally dependent on symptoms in the adult. Activity modification, bracing, anti inflammatory medications, physical therapy, and sometimes epidural steroid injections are usually all that is needed. Physical therapy that avoids hyper-extension and centers on core strengthening works best. The type and extent of surgical treatment depends the clinical symptoms and the patients particular anatomy. Most commonly it involves decompression of the nerves and surgical fusion of the unstable segment and possible the segment above if its involved. In young patients, usually under 30, when the disc is still normal and slippage hasn't occurred, we can directly repair and fix the pars defect maintaining the motion. Unfortunately many times the patients are not symptomatic until the disc and motion segments wears out that's why fusion is often the best choice. The good news is, as a group, these patients do great and are often able to return to full activity.

Degenerative Spondylolisthesis typically becomes symptomatic in the middle age and older population. Most common vertebral level is L4 - L5 but can occur at any level. There is no pars fracture. The facet joints in the back of the spine become incompetent and allow abnormal translation. Because the posterior arch (posterior elements) remain connected, small amounts of slippage can cause significant nerve compression. Typical symptoms include a decrease in standing and walking endurance. The bodies response to the facet degeneration cause the ligaments to thicken and large spurs to form in an attempt to prevent further slippage of the vertebrae. This response makes the nerve compression worse. Non-operative treatment includes anti inflammatory medications, physical therapy, and sometimes epidural steroid injections. When surgery is necessary it almost always includes spinal fusion in addition to nerve decompression. To free the nerves requires removal of the ligaments and facet spurs, which further destabilizes an already unstable spinal motion segment. Fortunately the outcome for this treatment is highly successful. Improvement in standing and walking endurance is often immediate.

These 2 images are of different patients both of which have 50% slippage of the L5 vertebrae on the sacrum. They are very different cases and require different corrections to solve the patient’s problem. It is very important ant to differentiate these two when you are anticipating surgical correction. The first radiograph is of a typical isthmic spondylolisthesis. The second is one with lumbosacral kyphosis and is much more unstable. The second case will require sacropelvic realignment and pelvis fixation to maintain reduction. 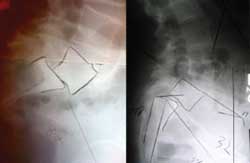 This is a teenage patient with a pars interarticularis fracture that didn't heal. In these rare cases where the L5-S1 disc is still normal, we elected to perform a direct screw repair of the pars defect and bone grafting. The Pars defect healed rendering the motion segment essentially normal.

First two images show fracture defect. The third image shows the defect being injected with local anesthetic. We did this as a diagnostic test. For several hours after the injection the patient had complete relief of her pain.

Subsequent images show post-operative images with the screws bridging the defect. She is now back playing volleyball at a high level. 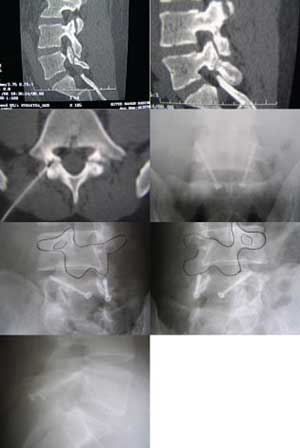